American League Has 144 Players in Service

Email ThisBlogThis!Share to TwitterShare to FacebookShare to Pinterest
Labels: 1943, The Milwaukee Journal

Gary Ashwill, on his fantastic blog, agate type, wrote about Negro League player Bruce Petway and his role as a Designated Hitter.  I'd never heard of Bruce Petway before yesterday.  Which, of course, set me off to find out more.  I searched through ancestry.com and Chronicling America and found some documents and stories.

Bruce Petway was born in Tennessee in 1885.  He came from a large family.  In 20 years of marriage his folks, David and Lizzie Petway, had 13 children, with nine of them surviving in 1900.


Just five years later we find that Bruce is a laborer in Nashville, still living at home.  The * before the name indicates a person of color.

That same year, we find Bruce on the manifest of the ship Merida.  The ship is sailing from New Havana, Cuba, to New York City.  He's traveling with Clarence Williams, Harry Buckner, William Bowman, Harry Moore, John Hill, John Hill Jr., Andrew Winston, and Andrew Gateward.  Most of them were members of the 1906 Cuban X Giants.

He makes the same directory the next year.


And also the Nashville directory.  He's back home, living with dad.  I have not located Bruce Petway in the 1910 US Census.


Bruce was a catcher and a center fielder for most of his career.


Bruce is back on the boat in 1916 with some more ball players.  This time he's on the Chalmette, departing Havana, Cuba, and arriving in New Orleans.  He's traveling with Melton O. Dell, Clarkson Brazelton, Harry Bauchman, Tullie McAdoo, John P. Hill, Edward Gans, John H. Lloyd, and Frank Duncan.  Several of them were his team mates from the 1916 Chicago American Giants.

Apparently he was a public speaker.

As many a man did, Bruce registered for the Draft in 1918.  We see that he has a wife, Mamie, who lives in Seattle, Washington.  This would be the woman in the hair pulling incident of 1917.

We find a marriage record.  Lake County, Indiana, is in the northwest corner of Indiana, just southeast of Chicago.  Perhaps this is Bruce's second marriage.

Apparently he and his wife had friends.

Posted by Mark Aubrey at 3:15 PM No comments: 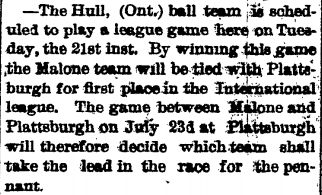 Over the next few weeks I'll be posting about the 1896 International League. It was composed of seven teams: