This week Rob Edelman filled in for John Thorn at the Our Game blog. Rob is a film historian and he provides two wonderful posts about early baseball films.  One of them, Headin' Home, has Babe Ruth in the featured role.  Rob talks about the film in the second post, Lost (and Found) Baseball, Part 2.  Go read about it now.  This entry will wait.

I decided it would be fun to see what the newspapers were saying about it.  The articles and ads span about a year and a half and go from New York to Hawaii.  From one of The Bemidji Daily Pioneer ads we see that it is indeed a six reel film.

I also find it interesting that the press marketed it towards youth (Baseball Bats Given Away at Each Matinee) and the ladies (With the speed of Douglas Fairbanks...).

I present my findings from the Library of Congress's Chronicling America site in chronological order. 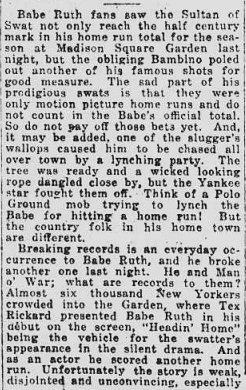 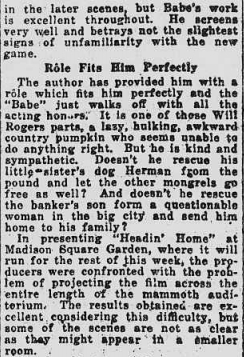 Some might wonder why I included two ads from the New York Tribune.  Variation.  Look close.  Those are two different drawings.

Posted by Mark Aubrey at 1:41 PM No comments:

Death from Base Ball Folly

Email ThisBlogThis!Share to TwitterShare to FacebookShare to Pinterest
Labels: 1886, The Washington Critic

Email ThisBlogThis!Share to TwitterShare to FacebookShare to Pinterest
Labels: 1912, The Hawaiian Star

Posted by Mark Aubrey at 3:39 PM No comments: