Email ThisBlogThis!Share to TwitterShare to FacebookShare to Pinterest
Labels: 1910, Charleston News and Courier

Email ThisBlogThis!Share to TwitterShare to FacebookShare to Pinterest
Labels: 1912, The Mountain Advocate

Opening Day in the K.I.T. League 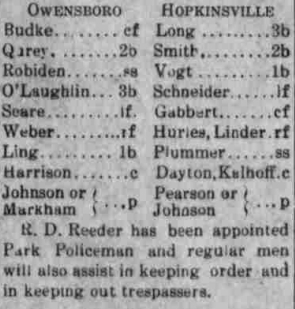 The K.I.T. League, or Kenkucky-Illinois-Tennessee League, also known as the Kitty League, was a Class D grouping of teams consisting of:


Don't quite know how the Alices slipped into the league, what, with them being Hoosiers and all.  Paducah was crowned as the Champions in that year.
Posted by Mark Aubrey at 8:31 PM No comments:

Dean Is Quitter In Charity Game

Email ThisBlogThis!Share to TwitterShare to FacebookShare to Pinterest
Labels: 1935, Engel Stadium, The Spokesman-Review

I plugged the terms "baseball" and "musical" into the search engine and up popped My Cinderella Girl, a musical baseball farce. The Library of Congress has the musical score, but I haven't found any instance of actual recording of the songs. Here are a few articles and images about and of the musical.

UPDATE - April 21, 2014
Scott Simkus has a nice post at John Thorn's blog Our Game.  It focuses on Mike Donlin and a bit of his wife, Mabel Hite and features a much more clear image of the "Play Ball" scene.
Posted by Mark Aubrey at 11:23 PM No comments:

Email ThisBlogThis!Share to TwitterShare to FacebookShare to Pinterest
Labels: 1910, 1911, Dubuque Telegraph-Herald, The Daily Times, The McCook Tribune, The Spartanburg Herald

Maybe Griffith went to Matson's for the new uniforms.  They do fit grown-up teams.  Probably not, as the ad is from six years later and in Albuquerque, New Mexico.

Posted by Mark Aubrey at 1:01 PM No comments: