Posted by Mark Aubrey at 8:15 PM No comments:

Email ThisBlogThis!Share to TwitterShare to FacebookShare to Pinterest
Labels: 1921, The Bisbee Daily Review

Looking through some Knoxville newspapers this weekend yielded this nugget, which must have been sent out on the wires.

That "is some heavy".  How much heavy?

Here's another claim to be the biggest and heaviest team.


That also "is some heavy".

Let's compare that to a modern team.  I've selected the Boston Red Sox starting nine for the 6th game of the 2013 World Series.


2013 weight info from Baseball-Reference.com.
Posted by Mark Aubrey at 7:11 PM No comments:

Email ThisBlogThis!Share to TwitterShare to FacebookShare to Pinterest
Labels: 1919, The Morning Oregonian

Posted by Mark Aubrey at 9:55 PM No comments:

The Yellow Kid and Baseball

John Thorn, the Official Historian of MLB, shared a photo on facebook of a pin featuring The Yellow Kid holding a baseball bat.  That sparked me to research what other baseball and The Yellow Kid connections there were.  I found a few.


Apparently Hogan's Alley was popular enough to be spun into a theatre production.


A bit about the origin of "The Yellow Kid" from an article titled: Something About the Comic Artists Who Draw the Funny Pictures in the Sunday  Papers 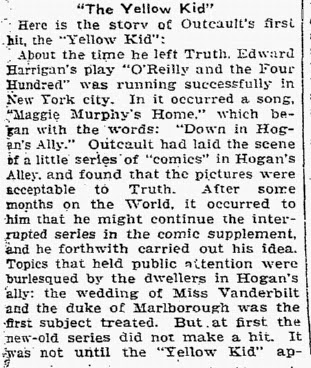 Several non professional teams around the nation used the nickname of  The Yellow Kids.

Posted by Mark Aubrey at 1:55 PM No comments: