A guide to cricket guides

In a similar vein to the New Old Base Ball Guides post I've collected a list of Spalding Guides for Cricket.

"But wait. This is supposed to be a baseball blog."

Yeah, whatever. The two sports are probably form the same mother sport, or at least in the same sport family. I'm currently doing some research with Jimmy Leiderman on Samuel Wright, father of the Wright brothers (Harry and George).  Samuel was a cricketer and I know nothing of the sport. 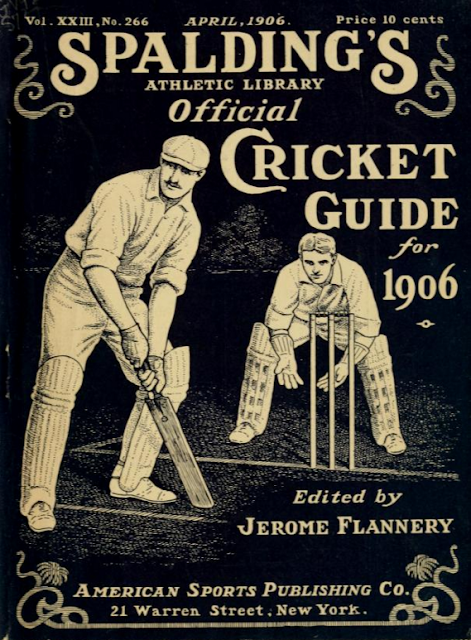 Posted by Mark Aubrey at 9:44 PM No comments:

Email ThisBlogThis!Share to TwitterShare to FacebookShare to Pinterest
Labels: cricket

Looking through my twitter feed today I came across this gem from Baseball Reference: 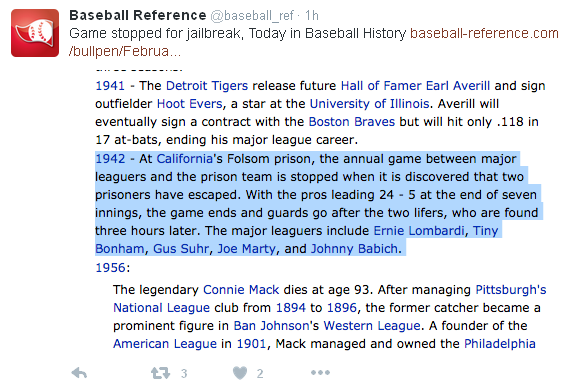 Another story too ripe not to look into.  The first article I found at GenealogyBank.com lined up with what the tweet stated.


The second story added a bit more information.  If this article is accurate, then the game wasn't stopped, but delayed, and the delay caused the match to go only seven innings.

Below is a list of the players from the box score.
I struggled with who Edwards, the catcher, was. Then I expanded my search in the newspapers.  The previous week Sacramento Bee ran a story about the upcoming game.

Now I know more about the game but I know nothing of the escapees.
Posted by Mark Aubrey at 4:23 PM 1 comment:

Towards the end of January cricket and base ball researcher Jimmy Leiderman posted a Baseball Field Diagram published in Venezuelan newspaper from 1895 on his Facebook page. With his permission I'm sharing it here. 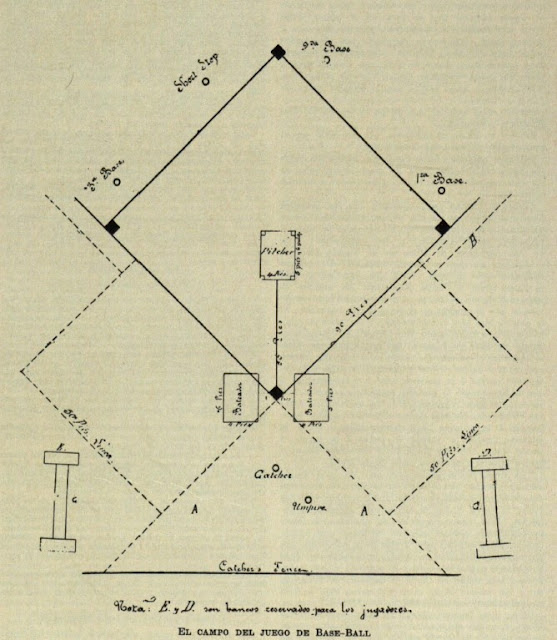 It made me wonder what other base ball field diagrams were printed, and can we learn anything about the evolution of the game?  Off to my favorite haunts to research.  One of the first ones that I came across was an experimental diamond.


In 1892 civil engineer Clifford B. Spencer, of Rolla, Missouri, submitted a proposal to the Chicago National League club (then the Colts) for a new baseball diamond.  One with four bases and a home plate.  A transcription of the article from The Sporting Life follows the images below. 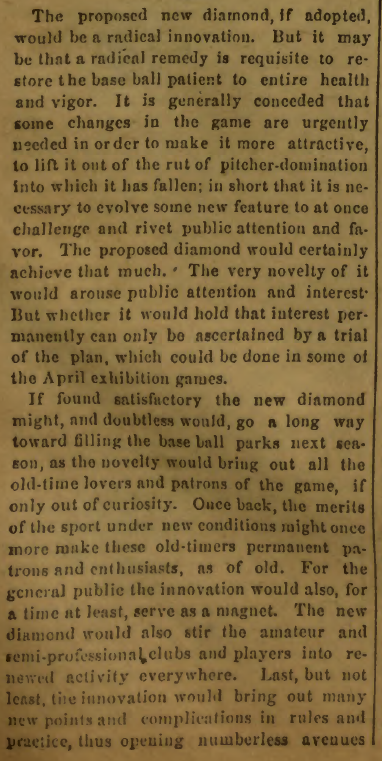 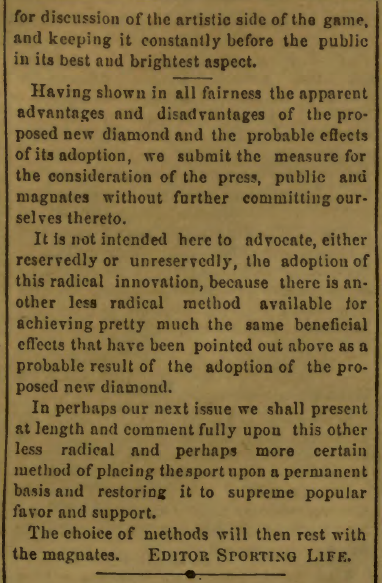 A DIAMOND CHANGE.
-----------
PROPOSED RADICAL ALTERATION IN THE FORM OF THE BALL FIELD.
-----------
The Good and Bad Points of the Scheme and Probable Consequences of Adoption Pointed Out.
-----------
On this page we present for the consideration of the rule-makers, and the comment of all interested in the improvement of the same of base ball, a new diamond. This proposed new diamond is the creation of Mr. Cliff B. Spencer, of Rolla, Mo., who furnishes the diagram and specifications. It was first submitted to the Chicago Club and then turned over to THE SPORTING LIFE by President Hart with earnest request for publication and comment.

In the accompanying diagram of this new diamond the dotted lines represent the present diamond, and the heavier black lines present the new diamond, which in appearance approaches nearer the true diamond form than what is now designated as a diamond, although really a square.

The proposed new diamond is a startling innovation, but the more it is studied the more favorably it impresses. The new diamond provides for a home base and four additional bases instead of three as now. This extra base would not, however, necessitate an additional infielder unless it is desired to make the game ten men and ten innings, which increase has been repeatedly suggested for many years by some excellent critics. Under the new system four men could attend to the infield as now the first baseman and second baseman taking care of their usual bases, the short stop becoming third baseman, while the present third baseman would be fourth baseman. A glance at the diagram will show that the new base lines would throw first and fourth bases about ten feet further out than the present base lines, thus making a very much larger area for fair balls, thereby increasing the batting very considerably, besides reducing the number of foul balls.

It will be observed that the distances from second base to third base and from third base to fourth base are each but 70 feet. This would give the base-runners better chance of stealing bases. It is true, the catcher's throwing distance is decreased from about 128 or 129 feet to 120 or 122 feet, and he is in a better position to throw the ball going diagonally across the diamond and there being no obstacle such as pitcher or umpire in the way. But the advantage would be still somewhat in favor of the runner, which is better than with the present dimensions, under which the ball, if properly handled, must inevitably and invariably beat the fleetest runner if the pitcher does not give him too much start.

Increased base-running would not, however, mean so many more runs as to make games seem tedious and scores look bad, because the distance from the plate to first base and from fourth base to the plate is still ninety feet and the entire circuit thirty feet more than the present circuit. Thus, while there would be more base-running on the short lines, the additional circuit distance, and the long distances between home and first and fourth and home, would operate against excessive run-scoring.

-----------
The palpable advantages of the proposed new diamond may be briefly summed up a follows:
* Increased batting even with the pitchers in their present position.
* A very marked decrease in the number of foul balls due to extended base lines and larger area for fair batted balls.
* Increased base stealing with better opportunity for good plays by catchers, and with less wear and tear upon the throwing arms of catchers.
* A livelier fielding game, owing to larger fielding area and more chances resulting from increase in batting.

No decided disadvantage are apparent in this proposed new diamond except that it may operate to the extreme in batting, base running and run-scoring. The first-named objection, could, however be easily overcome by deadening the ball somewhat more should the batting become too heavy. The second and third detects may be neutralized by the greater opportunities afforded catchers for good throwing work and the increased length of the circuit of the bases.

The proposed new diamond, if adopted, would be a radical innovation. But it may be that a radical remedy is requisite to restore the base ball patient to entire health and vigor. It is generally conceded that some changes in the game are urgently needed in order to make it more attractive, to lift it out of the rut of pitcher-domination into which it has fallen; in short that it is necessary to evolve some new feature to at once challenge and rivet public attention and favor. The proposed diamond would certainly achieve that much. The very novelty of it would arouse public attention and interest.  But whether it would hold that interest permanently can only be ascertained by a trial of the plan, which could be done in some of the April exhibition games.

If found satisfactory the new diamond might, and doubtless would, go a long way toward tilling the base ball parks next season, as the novelty would bring out all the old-time lovers and patrons of the game, if only out of curiosity. Once back, the merits of the sport under new conditions might once more make these old-timers permanent patrons and enthusiasts, as of old.  For the general public the innovation would also, for a time at least, serve as a magnet. The new diamond would also stir the amateur and semi-professional clubs and players into renewed activity everywhere. Last, but not least, the innovation would bring out many new points and complications in rules and practice, thus opening numerous avenues for discussion of the artistic aide of the game, and keeping it constantly before the public in its best and brightest aspect.

-----------
Having shown in all fairness the apparent advantages and disadvantages of the proposed new diamond and the probable effects of its adoption, we submit the measure for the consideration of the press, public and magnates without further committing our selves thereto.

It is not intended here to advocate, either reservedly or unreservedly, the adoption of this radical innovation, because there is an other less radical method available for achieving pretty much the same beneficial effects that have been pointed out above as a probable result of the adoption of the proposed new diamond. In perhaps our next issue we shall present at length and comment fully upon this other less radical and perhaps more certain method of placing the sport upon a permanent basis and restoring it to supreme popular favor and support. The choice of methods will then rest with the magnates.   EDITOR SPORTING LIFE.


Spencer's diagram and the article were later published in newspapers across the country.  I do not know if the proposed field was ever chalked out and played upon.  I'm not a math guy, but I'd be interested to know what the increased area would be for the Spencer's field.

1895 Venezuelan diagram courtesy of Jimmy Leiderman
The Sporting Life images from LA84.org
Posted by Mark Aubrey at 11:30 AM 1 comment: