I was able to attend the most excellent SABR Black Sox Scandal Centennial Symposium last month in Chicago.  I was able to meet researchers that I've corresponded with over the years, met some (new to me) SABR members, and had a blast learning about the teams involved in the scandalous 1919 World Series.

I've been pondering what might have happened if both teams tried their hardest to win the series.  No dumping of games.  I know that there are many baseball simulators on the market.  Years ago I spent some time playing with Strategic Baseball Simulation, a now defunct (but still free) sim.

I figured I should have some sort of method that was consistent.  I decided to use the starting lineups as described in the RetroSheet box scores.  Would a one game simulation work?  10?  100?  I decided on 1,000 games.  A big enough sample size to satisfy me.

I set the lineups and starting pitchers and let the program make in-game changes.

I asked Jacob Pomrenke, the All Knowing High Priest the Black Sox Scandal, if he knew of any other simulated the Series.  He responded that Mike Lynch, of Seamheads.com, wrote a book about 10 years ago: It Ain't So: A Might Have Been History of the White Sox in 1919 and Beyond.  Mike used the Out of the Park simulator to cover the Series and beyond.

Jacob also pointed me to Kenn Tomasch, a Phoenix based sports writer who, just yesterday published an APBA simulation that he ran of the 1919 World Series on his personal blog at Kenn.com.

There's one other paper that Jacob pointed me towards.  David Shiner published a paper (a pdf stored at dropbox) using Bill James's Brock2 projection method to show how the Black Sox players would have fared statistically if they had continued playing in MLB. Note that this does not cover the 1919 World Series itself, however.

My notes: I wanted a quick and easy sim.  I might have been able to tweak the SBS data files a bit more, perhaps by not allowing any player that didn't play in a specific game to be played in that game, but this was for fun, not purely hardcore stats.  I did not include cumulative historical stats for any of the games beyond game one.  I did not take into account rest days, travel days, etc.  Each series of simulated games was run as if the players were fresh, using their regular season (1919) stats.  Each 1,000 game run took about 35 seconds to complete.  Much more time getting the data files prepped and then making a results table.

Posted by Mark Aubrey at 1:38 PM No comments:

Email ThisBlogThis!Share to TwitterShare to FacebookShare to Pinterest
Labels: 1919 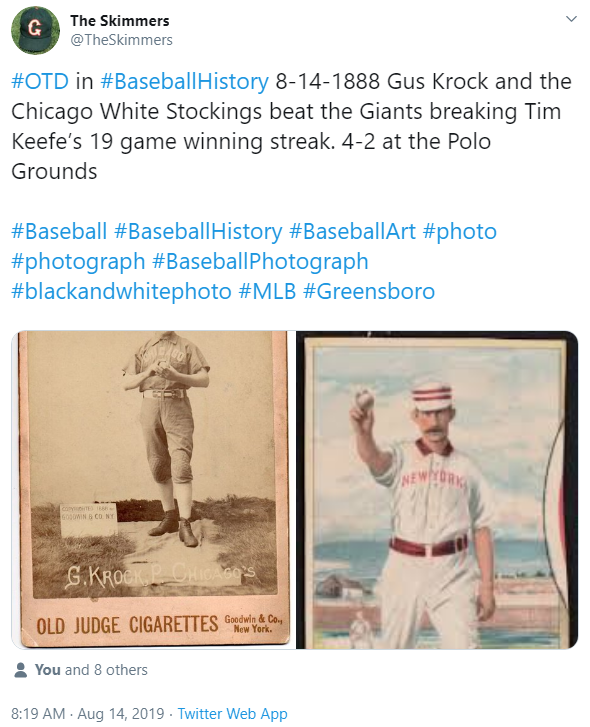 It kicked off a bit of discussion, mostly around Tim Keefe.  Charlie Bevis wrote an excellent biography of Keefe for the SABR BioProject.

Charlie has some solid sources and citations.  I thought I'd expand that a bit, giving links to the census (and other) records.  I'm presenting these in chronological order.


There are a few more avenues of research to be shown regarding Tim Keefe.  Some background on his wife, Clara Gibson Helm, his sporting goods venture with William Becannon, and city directories galore.  I'll save those for another post.

In the original Twitter conversation I said (referring to the lawsuit between Keefe and Becannon):


Why am I going down this rabbit hole? Because on some level it is part of the real life story of Keefe. He was more than just base ball stats and census records.

Sometimes, though, you need to start with baseball stats and census records.