Posted by Mark Aubrey at 9:38 AM No comments:


August 27, 1925 - Kenesaw Mountain Landis, Commissioner of Baseball, announces that has has found no justification for penalties to Nashville Vols players Fred Eichrodt and Lute Roy for allegations of attempts to switch the two players to New Orleans for the remainder of the season to enhance the Pelicans chances to win the championship.

However, the Commissioner states that Vols manager Jimmy Hamilton is "highly censurable for encouraging Ralph McGill, sports editor of the Nashville Banner, to publish the story". During the hearing in Chicago, Larry Gilbert, manager of the New Orleans club, was called to testify.

I wanted to know more about the story so I went off to GenealogyBank. 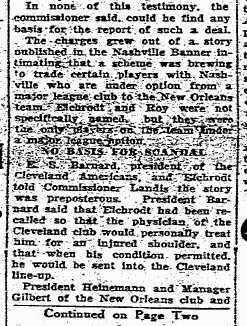 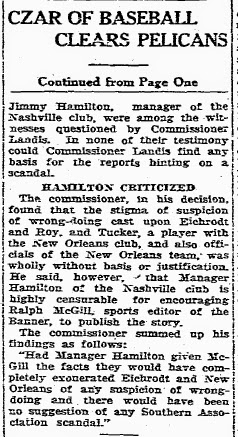 Posted by Mark Aubrey at 1:37 PM No comments:

Email ThisBlogThis!Share to TwitterShare to FacebookShare to Pinterest
Labels: 1925, The Times-Picayune

Graham Womack has a great baseball site, Baseball: Past and Present.  I was looking through it and came across his interview with Bob Usher about the Hollywood Stars and Los Angeles Angels on August 2 of 1953.  I was curious to see if I could find any images from that dust up.  I did.

images from Paper of Record
Posted by Mark Aubrey at 10:39 AM No comments:

Email ThisBlogThis!Share to TwitterShare to FacebookShare to Pinterest
Labels: 1953, The Sporting News

Satchel Paige doesn't need much of an introduction.  He played in the Negro Leagues, finally making it to the bigs in 1948.  His final game in the major leagues was on September 25, 1965.

There were a few guesses.  I didn't know, but I needed clarification.  Did "organized ball" mean only MLB?  Ted clarified that it meant MLB and their affiliated minors.  I still didn't know the answer.

A bit of digging on baseball-reference.com and then GenealogyBank.com yielded the following article.  Satchel's final game in organized ball.

So you don't have to squint... 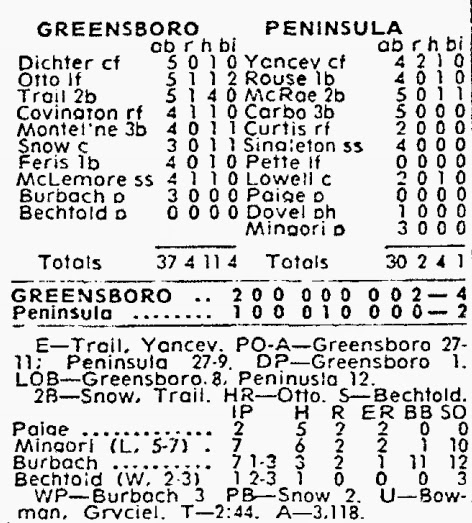 images from GenealogyBank.com
Posted by Mark Aubrey at 10:25 PM No comments: