The following photo (which I lifted without permission) was posted on the facebook page of the Institute for Baseball Studies. 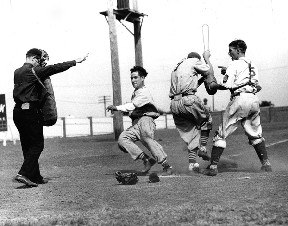 I wondered if I could find the date.  Looking through online newspaper archives showed me that the tourney took place at the end of August.


The first game in the tourney was on Saturday, August 29.  St. Louis didn't fare well.

The second game was scheduled for the next day, Sunday August 30, and then the tie-breaker, if necessary, was to be played later in the day.   As it turns out, it was necessary.

The bell ringer was swarthy Yogi Berra, whose pants-around-ankles figure was in sight almost every time the L.A. boys looked.  He went three for three, scored three runs, hit a double, the day's only extra baser, and swiped home in the seventh.

Yogi Berra was just a lad of 17 when he went to Hastings.  Very soon after the tournament ended the Cardinals signed him, apparently to save him from a life of boredom by book learning.


Looking into these games raises another issue.  The caption on facebook says that Gene Mauch was catching.  According to the box scores he was playing third base.  The catcher was listed as Kinaman.  I assume that to be Dick Kinaman who knocked around the minors from 1943 to 1961.


images from GenealogyBank.com
Posted by Mark Aubrey at 11:54 AM